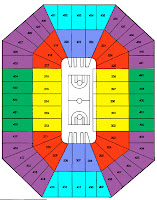 Milwaukee Bucks fans are looking forward to the first preseason game of 2012.  The Bucks will play face the Cavaliers on 10/9, in Cleveland.  There are a total of six preseason games to be played before the Bucks play their first official game on November 2 in Boston.  The second October game for the Bucks will be at Chicago.  The team will also play against the Grizzlies in La Crosse Wisconsin.

The Bucks are looking forward to the new season, as some familiar faces return to the court, while others have moved on to other teams.  The biggest move for Milwaukee in the off season was at the position of starting center.  Andrew Bogut is now a Golden State Warrior, and currently healing up from an ankle injury.   He leaves Milwaukee with a 12.7 points per game average.  Replacing Bogut will be Sam Dalembert and Joel Przybilla.  Brandon Jennings will be coming back for another season.  Monta Ellis, Beno Udrih and Marquis Daniels will also get playing time at guard.

Bucks Tickets for Home and Away Games

Bucks tickets for the upcoming games at home are available now. Ticket King has tickets ranging in location from upper level behind the hoop, to court-side tickets, just yards from your favorite players.  Ticket prices are reflective of supply, game date, and opponent.  For best results, check the current Bucks schedule and give us a call. We can find you the right ticket.

Ticket King has been Wisconsin's most trusted full service ticket broker since 1992. For hard to find tickets to sold out and premium events, fans trust Ticket King. We're members of the National Association of Ticket Brokers with two offices to serve you. Order online at https://www.theticketking.com View all posts by Ticket King Wisconsin